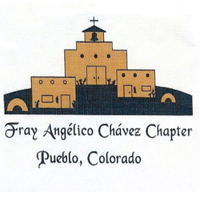 Your gift to the Pueblo Heritage Museum ensures that we can continue to tell the story of our history to Pueblo’s residents, tourists and future generations.

The purpose of the society is to promote on-going genealogical research, through the study of family history, tracing lineages and recording ancestral information.

Annual Membership: from Jan. 1 – Dec. 31. Get a membership application as well as see events and library list at our website: www.facc-genealogy.weebly.com

Fill in the form at the bottom of the page, click on continue to pay through PayPal.

In addition to the researching, networking, socializing and informative presentations at our monthly meetings, the publications and resource library materials listed below, provides additional information and inspiration to help you in your family research.

As New Mexico’s first native Franciscan priest, Fray Angelico Chavez (1910-1996) is known as a literary and artistic figure, as well as an intellectual and a historian.

Fray Angelico Chavez was born in Wagon Mound, New Mexico from Chavez and Roybal lineage that have long ties to northern New Mexico. He lived his early life in Mora, where his first language was Spanish. Later in life he lived in the villages of Pena Blanca, Cerrillos and the Indian Pueblos of Santo Domingo, Cochiti, San Felipe and Jemez, where he served for over thirty years. He was later appointed archivist for the Archdiocese of Santa Fe (1975-1982). His published works focus on the people who first made their way up the Rio Grande Valley from El Paso del Norte to their descendants who faced the advancing American frontier. His contribution to translation, genealogic research and regional history is a legacy to his life-long devotion to his Hispanic heritage.

In 1995, Fray Angelico Chavez honored the Pueblo Chapter of the GSHA by permitting the use of his name in its title. The Fray Angelico Chavez Chapter of the GSHA is located in Pueblo, Colorado and is the largest of the three Chapters in the United States that currently make up the Genealogical Society of Hispanic America (GSHA). The other Chapters are Southern California Chapter and the Utah Chapter. Its members are dedicated to ongoing genealogical research comprised of the study of family history, tracing lineages and recording ancestral information.

The Genealogical Society of Hispanic America, its presently affiliated chapters and any future chapters respect your privacy. Any personal information you provide to us including and similar to your name, address, telephone number and email address will not be released, sold or rented to any entities or individuals outside of GSHA. Likewise, the same information shall not be used by members of GSHA for purposes unrelated to society business without prior approval from the Board of Directors of GSHA.

“In all of us there is hunger,
marrow deep, to know our heritage,
to know who we are,
and where we come from”
-Alex Haley-